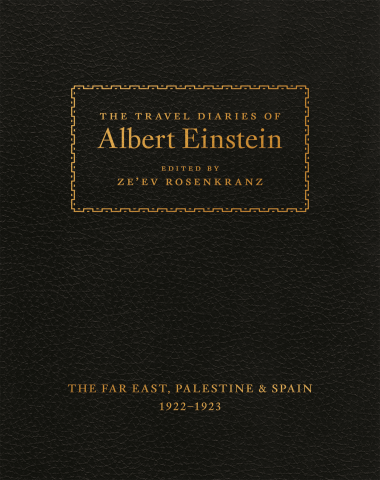 The travel diaries of Albert Einstein : the Far East, Palestine, and Spain, 1922-1923 / edited by Ze'ev Rosenkranz Abstract: In this latest volume, Einstein&#039;s visible public persona is amply documented in his correspondence, honors and prizes, lectures and travels, articles, and the many solicitations asking him to join public initiatives. Einstein joins a Zionist fundraising mission led by Ch. Weizmann, and he visits the United States for the first time. Einstein travels to major cities, including New York, Boston, and Chicago, and he delivers his now famous Princeton Lectures. Scientific issues remain at the core of Einstein&#039;s preoccupations. Correspondence with N. Bohr, W. Bothe, P. Ehrenfest, H. Geiger, H. A. Lorentz, L. Meitner, and A. Sommerfeld records Einstein&#039;s interest in and contributions to the emerging modern quantum theory. He addresses conceptual problems, such as the fundamental nature of light and its emission mechanism, in a proposed experiment with canal rays. Einstein continues to engage in original research, other expert opinions, and patent applications. Throughout the year, Einstein navigates complex territory in his professional and personal life. He travels with his older son to Bologna, yet turns down repeated invitations to Munich. He mends his friendship with M.Born, but receives stinging criticism from F. Haber for traveling to the United States. He supports the nomination of Masaryk for a Nobel Peace Prize, travels to Amsterdam in order to intervene on behalf of Germany at the Paris reparations conference, and assists Russian physicists in their efforts to rebuild and develop Russian science. Einstein&#039;s letters reveal his Social Democratic political positions. Abstract: The first half of this volume presents a substantial amount of here-to-fore unavailable correspondence. From among family letters closed for twenty years after the death of Margot Einstein, who donated them to the Albert Einstein Archives in Jerusalem, the volume presents, for the first time, letters written by Einstein&#039;s sons, the adolescent Hans Albert and little Eduard, and numerous letters written by Einstein to his cousin and future second wife Elsa Einstein. Combined with newly available correspondence with his close friend Heinrich Zangger, this supplementary correspondence provides vivid and intimate details of Einstein&#039;s private life. It documents the emotional bonds to his family and friends; the severe deprivations caused by the war to family members in Berlin and Zurich; the fragile health of Mileva Einstein-Maric during these years of separation and divorce; the worries and joys of caring for the sons; and Einstein&#039;s views on German and international politics during this turbulent period. The second half finds Einstein full of optimism about Germany&#039;s new democracy.He vigorously promotes general relativity and the endeavors of other scientists toward its further confirmation. He responds to the rising interest in his work among philosophers, as attested by correspondence with M. Schlick, H. Reichenbach, R. Carnap, E. Cassirer, and H. Vaihinger. And yet he is embroiled in vociferous, politically tinged, public attacks on his theory of relativity. He considers leaving Berlin, which would have deprived the Weimar Republic of its most famous scientist. In many letters, colleagues, friends, and unknown admirers offer support. Einstein travels to Leyden, where he is appointed a visiting professor and where, in the circle of friends such as P. Ehrenfest, H. A. Lorentz, and H. Kamerlingh Onnes, he is involved in lively debates on issues related to quantum physics. He visits Oslo and Copenhagen, where he meets with N. Bohr, and receives invitations to the United States, anticipating his first visit to the New World in 1921. A translation of selected non-English texts included in Volume 10 is available in paperback. Since this supplementary paperback includes only select portions of Volume 10, it is not recommended for purchase without the main volume. 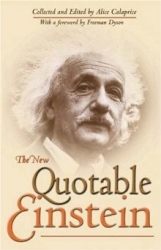 The new quotable Einstein / collected and edited by Alice Calaprice ; with a foreword by Freeman Dyson The love letters / Albert Einstein, Mileva Maric ; edited and with an introduction by Jurgen Renn and Robert Schulmann ; translated by Shawn Smith 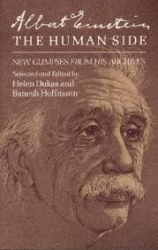 Albert Einstein : the human side : new glimpses from his archives / selected and edited by Helen Dukas and Banesh Hoffmann